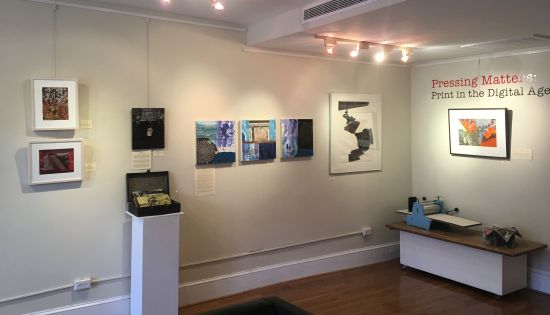 The pun inferred by the title of the Washington Printmakers Gallery’s latest exhibition playfully underscores the digital revolution’s effect on printmaking in two fundamental ways.  Pressing Matters – Print in the Digital Age, posits that digital technologies are upending the historic role of printed materials in the transmission of knowledge and ideas.  Concurrently, these very same technologies are influencing the artistry of printmaking itself.  While programs such as Photoshop offer exciting possibilities for artists to impart their ideas, they can simultaneously remove the intimate, physical connection of the artist’s hand directly touching the paper.  “Pressing Matters” seeks to investigate how artists are responding to these concurrent trends within their practices, mixing pure photography with more traditional printmaking methods.

Either one of these ideas could serve as the topic for an investigatory exhibition; this show merely scratches the surface.  Probing both topics simultaneously in a compelling manner is a feat accomplished by only a few of the displayed artists.  Cynthia Back rises to the challenge with her reduction woodcut titled Fire and Rain.  The work displays a series of four vignettes in contrasting colors that fan out from a point situated at the lower edge of the picture plane.  Alternating drowning landscapes with visions of firey hells, Back creates a moving confluence of events ripped from the headlines. This confluence is all the more striking given the artist’s visceral color combinations, where cool blues and grays butt up against hot oranges and ambers.  Those stark dividing lines, coupled with mismatched horizon lines within each vignette, seem to mimic a photo collage, yet the artist’s hand is also visible in areas in which the colors ever so slightly bleed into one another.  Here Back reasserts the relevancy of “traditional” printmaking in elucidating modern dilemmas. 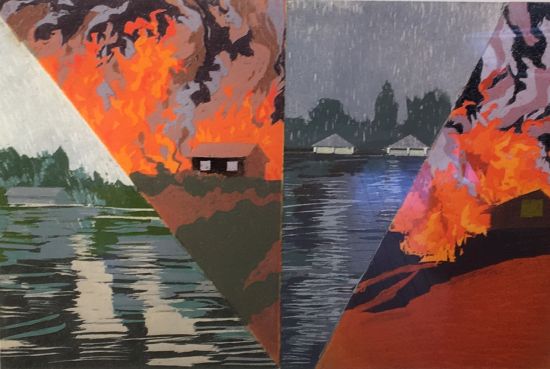 Helga Thomson’s quartet of prints from her TREELOGIE series strikes a similar (if less visceral) chord with compositional arrangements that seemingly mask their digital underpinnings.  Incorporating multiple layers of photographs with other digital imagery in Photoshop, Thomson creates multilayered imagery that seamlessly blends digital and seemingly hand-made elements that cast nature in a referential light.  Icicle Trees, where the arboreal elements appear untethered from the earth and floating in space, throws the viewer off-kilter with its forced, upward trajectory of perspective.  The photographic components in the center of the work are recognizable as such, but they give way to more impressionistic elements at the top and bottom of the work.  These elements, which at first glance appear to be graphite lines over watercolor, are themselves digitally created, further blurring the lines between manmade and computer-generated.  While subtle, the works also address contemporary issues around environmental awareness by invoking a watery realm that envelopes these botanical giants on all sides.

Ron Meick is also concerned with newspaper headlines, though you wouldn’t necessarily glean that from a first glance at his work Launch of a Pixelated Message.  Unlike Thomson and Back, Meick’s work combines both handmade (monotype) and digital (pixelated photo) elements within the work, adding a level of dimensionality to the work not seen elsewhere in the exhibition.  Meick’s photographic component is enlarged until only the colored pixels are visible, then disassembled and adhered seemingly randomly to plexiglass which floats above the traditional print.  Like Thomson, Meick’s intent is not immediately apparent upon first view.  The pixelated image is actually a photograph of a North Korean rocket launch, enlarged until it is visually unrecognizable and reassembled across an indistinguishable background.  By forcefully distorting his imagery, Meick calls into question our understanding of events behind the headlines, both on an intellectual level (do we fully understand what we are seeing?) and from a political perspective (how much do we trust what various media and government officials tell us?).  The artist takes no political sides and provides no definitive answers, encouraging the viewer to come to their own conclusions. 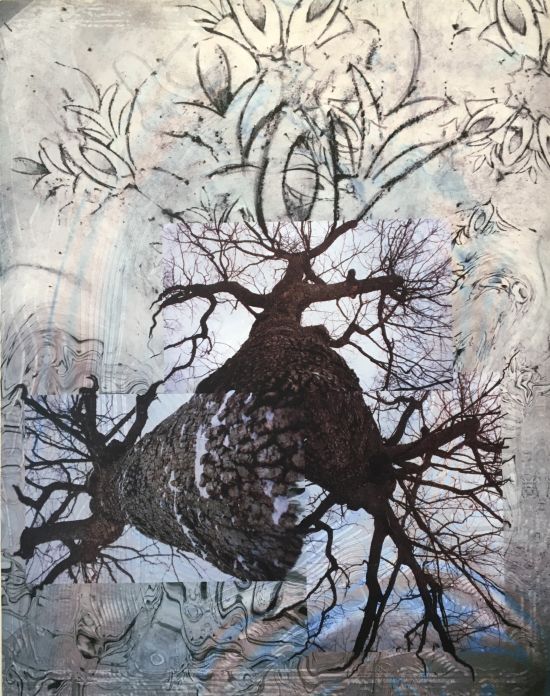 Annette Gandy Fortt and Rosemary Cooley also blend traditional and digital imagery in works that address the technology in more generalist terms. Cooley’s Il Potenza di Parole (“The Power of Words”) is a triptych that combines mono and digital prints into a collage that invokes the changing nature of print over human history, from the Mesopotamian era through the twentieth century.  The use of differing papers from around the world further cements the idea of written text as fundamental to the development human societies.  In a similar vein, Fortt’s Modern Day Scroll and Tech Environments use traditional linocuts with mixed media to envision the dawn of new possibilities in digital communication.  Though mechanical, these artistic depictions of computer motherboards seem to speak a structured language untethered from the human tongue.  Both artists underscore the power of language, but while Cooley is steeped in the history of the spoken (and written) word, Fortt envisions a future where language takes on new, machine-driven elements.

These aforementioned works are united in the way they force the viewer to engage with their imagery.  Open to interpretation, their meanings are multifaceted and somewhat subtle, encouraging the viewer to come to their own conclusions over time. The photography included in the exhibition does not reach this level of engagement.  While images depicting a multi-lingual lawn sign encouraging tolerance or a café bar lined with wired workers display a viewpoint about our modern world (largely dictated by the image maker), they amount to digital data points that inform the viewer rather than a multifaceted dialogue that engages the viewer.  One exception is Sally Canzoneri’s Handmaids Outing that seems to capture handmaids on a Georgetown sidewalk.  I say “seems” because the eye cannot quite believe this is happening – surely it is Photoshop manipulation at its subtlest (the artist indicates it is not).  While fully open to interpretation, the image is nonetheless subtly menacing, displaying a moment where fiction becomes reality.  Echoing Meick, Canzoneri seems to suggest that we cannot necessarily trust what we see with our own eyes. 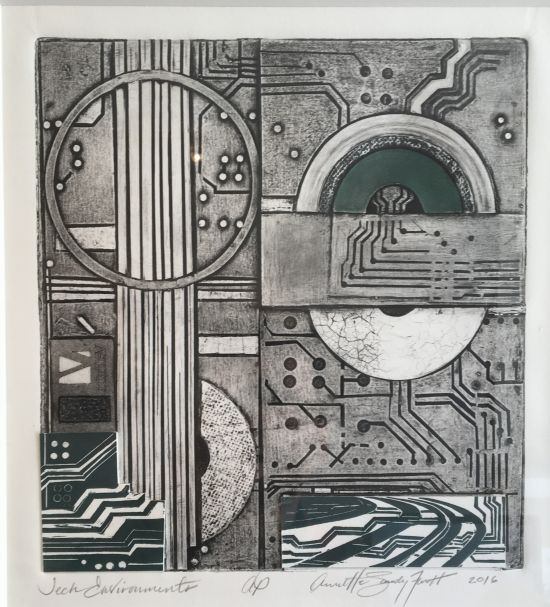 While the straight photographs presented capture passing moments of interest to the photographers, their visual draw is fleeting when staged next to more artistically dense works that combine digital and traditional mechanisms.  Based solely on this short survey, it would seem that traditional print techniques are not only relevant in today’s digital age, but vital to underscoring the nuances behind rapid shifts in technologies and modes of communication.